As the financial crisis deepens, and the Russian ruble fell, the demand for bitcoin jumped sharply in Russia. It became a leader in terms of transactions volume at LocalBitcoins.

Russia ranks first in terms of volume of transactions with bitcoin on the peer-to-peer trading platform LocalBitcoins, according to CryptoDiffer. In May, bitcoin trading paired with the Russian ruble accounted for 19% of the platform’s total trading volume. There were 3,420 bitcoins sold or bought in Russia last month, or just under $ 32.5 million at the current exchange rate. The average weekly volume in Russia stands at approximately 800 BTC. The representative of LocalBitcoins in conversation with the Cointelegraph noted the increased activity of Russian traders. 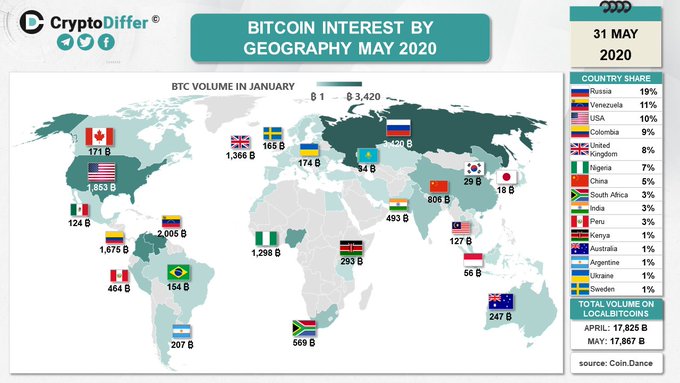 Russia is followed by Venezuela, with 11 percent share (2005 bitcoins), and the United States, with 10 percent share (1853 bitcoins). In these markets, the average weekly volume of transactions with bitcoin was about 400 bitcoins.

The total trading volume at LocalBitcoins in May was 17,867 BTC, slightly higher than a month earlier.

It is worth noting that the popularity of LocalBitcoins as a platform for buying bitcoins fell noticeably after the introduction of an enhanced verification and user identification procedure in light of tighter cryptocurrency regulation in European countries. Back in early 2019, the monthly volume of bitcoin transactions on LocalBitcoins exceeded 40,000 BTC.