The Russian Ministry of Finance has completed a new version of draft bill concerning the ban of “money surrogates” and is about to introduce it to the Parliament.

This information was provided to CoinFox by Alexei Moiseev, Deputy Minister of Finance. The previous version of the bill had been submitted in the Fall 2015 but was returned for revision.

“We have been elaborating it together with law-enforcement agencies and now are remaking the draft in order to introduce the bill for the second time”, declared Moiseev.

He also expressed his doubts concerning the prospects of MPs’ initiative on the ban of “surrogate money”. This document had been supposed to enter the State Duma – the lower house of the Russian Parliament – before the one elaborated by the Ministry of Finance.

“In practice it hardly can pass the first reading”, explained Moiseev.

The first version of the draft bill proposed by the Ministry of Finance classified bitcoin mining and trade to be a criminal offence. In addition, all bitcoin-to-ruble exchange transactions are the matter of particular concern for the Ministry.

Those issuing “surrogate money”, buying them with a goal of resale or selling them would have been fined 300,000 rubles (around $5,000) or sentenced to a year of correctional works. If committed by an organised group, the deed could have incurred even a stricter punishment.

The Ministry has not disclosed any information about the changes in the new version of the draft. Therefore if the bill is passed the consequences for bitcoin users and miners are still unclear.

The Ministry of Finance started working on the draft law back in August 2014. It explains its harsh stance on the digital currency claiming that the “surrogate money” might be used for money laundering purposes and create additional risks.

Nevertheless, the draft Code of Administrative Violations presented in December 2015 deals with “surrogate money” issued on the territory of the Russian Federation. Thus, the future of bitcoin in Russia depends on whether the draft bill is passed or not, and whether the new Code accepted. 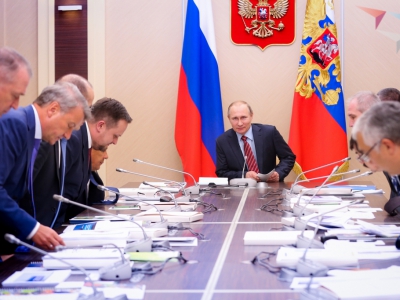 Herman Gref, CEO and Chairman of the Executive Board of the largest Russian bank Sberbank, highlighted the potential of blockchain for the transformation of all domains of social and public life, during the meeting of the Agency for Strategic Initiatives in Moscow.

Moving in the right direction: Experts and community on new Russian bitcoin bill

The new cryptocurrency draft law from the Ministry of Finance is much welcomed by bitcoin experts and the community as a step away from bitcoin ban but criticised for its imperfections.